Can you do a three-stage boss monster for D&D Next? Absolutely—and it’s warranted. If you thought that the Big Bads of 3e/Pathfinder and 4e…

• don’t get enough actions
• have the fun parts front-loaded
• are too vulnerable to conditions, and
• lack a sense of progress through the fight

…well, the D&D Next monsters have those issues when used as boss monsters, too.

The Obvious Caveats
I have only the playtest packet to go by, and by definition that means the game ain’t done yet. These monsters are also designed for general use, not as boss monsters specifically (but see the “Part 3: A DM Walks Into a Bar” blog entry tomorrow). Most of the playtest materials we’ve seen have been player-focused: classes, spells, etc.

D&D Next playtesters have been given multiple adventures to play through, so if we can divine designer intent from someplace, that’s where to look, eh? My experience thus far has been that the bosses play like regular ol’ D&D monsters, not the three-ring circus of awesome that is a AngryDM-style boss monster. They aren’t pulling their weight as adventure-climax foes.

That sounds critical, but the boss monster awesomeness isn’t necessarily the monster designer’s job, so it’s not really a critique of the monsters themselves. Again, see tomorrow’s blog for more on that. First, though, let’s three-stage up one of these 5e puppies.

One note: I’m sharing my playtest impressions here—to my mind, playtesting D&D Next’s suitability as a toolkit is of paramount importance. D&D has always been (among other things) a toolkit. I’m not revealing stat blocks or anything, though—sign up for the playtest and see for yourself.

OK, Playtest Packet, What Ya Got?
For starters, ya don't got dragons equivalent to the high-level Pathfinder one we talked about in Part 1. The D&D Next dragons are straight-up claw/claw/bite machines, with the requisite breath weapon and frightful presence. No spell-likes, let alone full-on spellcasting. Nothing like the 3e dustcloud they’d make by hovering. (Remember, they ain’t done yet, and that might be the reason.)

Let’s look at something more obviously a boss monster. How about the lich? It’s a natural boss-monster. You always find the lich in the last room of the dungeon, right? It’s not like you’ll find “Room 22: 1d4+1 liches.” 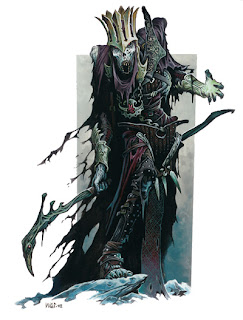 The D&D Next lich is mechanically simple…kinda. All the complexity is sitting within the spells it casts. It’s got the usual set of undead immunities and a paralyzing touch. For spells, it’s got straight-up damage (fireball, lightning bolt), some area denial (cloudkill, wall of fire), and some sneaky stuff (invisibility, mirror image)…all 1/day.

That’s it…kinda. There are also a bunch of customization options that amp up the lich’s lethality: a damaging aura, frightening gaze, draining touch, and a bunch of “cast as higher level” stuff. No word (yet) on how these change the lich’s level.

Three-Staging the Lich
The lich wants to cast a spell every round—that's the fun stuff, right?—but it has nothing beyond its undead immunities to make sure it gets those spells off. Vulnerable to conditions? At least somewhat.

The flip side is that there’ll be a strong sense of progress. When the 5e lich starts using clearly weaker spells, the players will feel like they’re getting somewhere. That’s good! Let’s build on that.

To make this lich into something that AngryDM would tolerate, let’s split up the spell list and differentiate the lich's behavior a bit.

Stage One: The big-boom stuff goes in the first stage. That’s when our lich is shooting lightning bolts from its bony hands, cackling maniacally, and using Noonan’s nerve-jangle (not an actual spell) to force-move players into that cloudkill. The special-effects guys work overtime in stage one.

Eventually, the players deal enough damage to force a stage change. The D&DN lich disappears (that invisibility spell!), and its disembodied voice taunts the players.

Stage Two: This stage is all about the lich being clever and sneaky. It’s got second-shelf, single-target spells in this stage, but it’s using mirror image, invisibility, and maybe even disguise self to impersonate a party member. The fundamental challenge to the players is to deal with all the obfuscation.

I’m enough of a ham to have stage two end with some play-acting about the lich’s magic failing. Maybe its wand breaks in two, or it tries to cast a spell…and it fizzles. Don’t dedicate an action to it—just describe it and do your stage-change.

Stage Three: Now our lich acts desperate. We design the whole stage to get this feeling across. This is when it uses most of its undead tricks like the paralyzing/draining touch and maybe a necro spell or two, but that’s it. This is a lich who’s out of gas, and the players get the emotional reward of feeling that  desperation before the lich finally succumbs and the “great hunt for the phylactery” begins.

To be honest, my own D&D Next proficiency hasn’t reached the point where I can comfortably eyeball how many spells you should give a three-stage lich. And the game ain’t done yet. Maybe four, of which you’ll likely use three?

Right now, D&D Next monsters are really simple. For an exercise like this, that’s good! It gives us plenty of room to get our toolboxes out and get to work.

Next Up: A DM, an adventure designer, and a monster designer walk into a bar. Among the three of them, who’s best equipped to build a three-stage monster?

David Noonan
I'm a game designer. My early work is for Wizards of the Coast, where I designed a lot of stuff for Dungeons & Dragons--both 3rd and 4th edition. Now I write narrative stuff for various video games. Follow me on Twitter: @davidnoonan